The Story of the NEOC Troll

However, any "practical items" would cost more money than we had. Hans instead managed to talk me into making hand-crafted awards. When I had lived back in Stockholm, I worked as an instructor-supervisor at a Workshop for handicapped people and we made stuffed animals among other things.

One item was a cute stubby viking figure with a full beard. We decided that this design could easily be redone into a good looking orienteering figure. So I started to make lots of stuffed orienteers - 36 of them. For each class there were two smaller ones for 2nd and 3rd places and a bigger one for the winner. And when they were finished I was truly sick and tired of stuffed orienteers (though live ones are still OK)! But they looked good, with map and compass hanging from strings, a bib on the chest giving class and place, and a yellow visor topping it off. The body was two shades of green and the beard and hair were reddish. 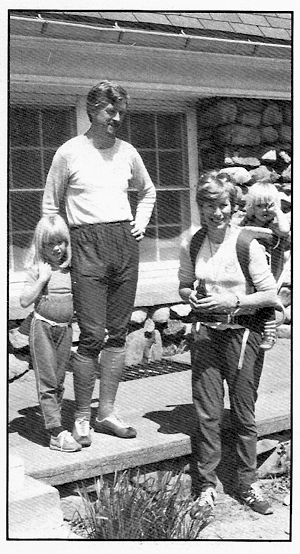 When we were getting things ready later that year for the U.S. Championships at Pound Ridge, N.Y., I illustrated the invitation and results with these O'-figures. At some places we used the head part of the doll only, the same design we use now for NEOC's logo. We also used some O'-troll awards at this meet, but only for champions this time. There is a limit to my O'-dedication.

I made some more NEOC O'-dolls later on but they were very exclusive awards. The D19 and H21 champions got them at the Bear Brook North Americans in 1975 and at the Boxford, U.S. Championships in 1978.

So if you have got one, you are either very good or a real oldtimer.

Pictured at left: Troll-maker Lena Bengtsson, with husband (and NEOC President) Hans, and their children, Malin and Hanna—at West Point in 1979.

Contact a Meet Director or Board member to see how you can help your club!
NEOC is an all-volunteer organization.