Beginning a few weeks ago, I was being asked, “How long is the traverse this year?”, How many controls?” My answer, up until about two weeks before the event was, “I don’t know, I haven’t designed the course yet.” Despite my cavalier response, I had gone over mentally where I would like the start to be, we had chosen a finish area many months ago when the permit was applied for, and I had some ideas on where the course would have to go between the two points to cover the 13 or so kilometers.

Last year I had scoped out an area on the southeast part of the Ponkapoag Pond map. I knew there was good parking at the local elementary school. A previous traverse had used the upper part of the map, which had an old military installation, storage for the Nike air defense missiles for the launch site atop Chickataubut Hill, but there was still some unexplored area which was covered with dark green. Last year I went through that part of the maps, and found not dark green, but very open woods, and some gently flowing hills devoid of rock, or any other features. The trail was certainly mapped incorrectly; I did some remapping, but I realized at that time that I would not get it to satisfactory detail in time, so I turned my attention to an unmapped area in Milton and ran last year’s traverse start from there.

This year I was determined to use the area, and I was able to remap the trail, and I found a few others which I would guess were created by mountain bikers, who like to make curvy narrow trails, which go nowhere in particular. Fortunately there were a few rock features, and I worked a bit on getting the vegetation accurate enough so no one was tempted a route through dark green.

The course through there would not be particuliarly difficult, there was no intricate detail, but the woods were nice and open and very runnable, so with two somewhat long legs to start, the field could spread out before crossing to the more technical area west of Route 24. 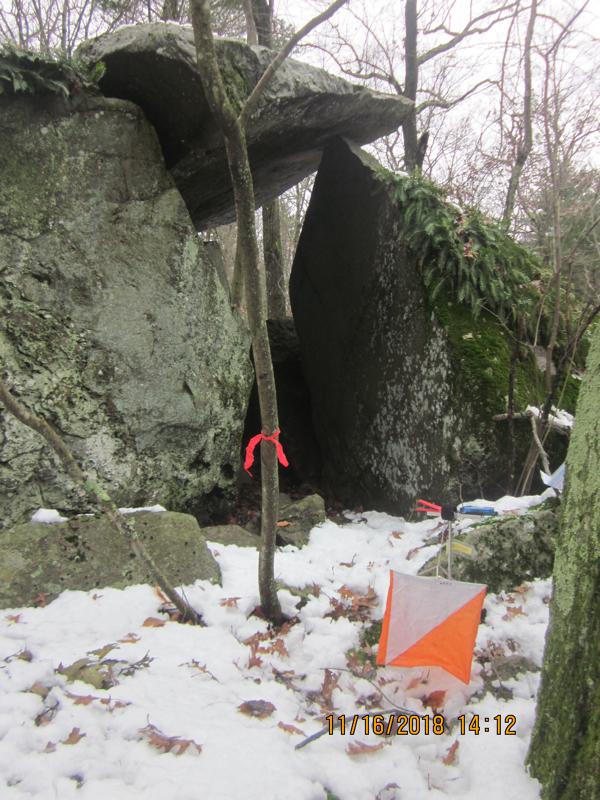 This area had been used before, and I again, as I had last year, swiped control locations and legs designed by Ian Smith for this area. As I ran around I noticed some large boulders in the area just before the course would cross the bridge over interstate 93. As I approached them I was amazed just how “large” these boulders were. In jumbles and “small” boulders not shown on the map were over a meter high and 2 to 3 meters in diameter! I had to have a control in this area, and found the “boulder group” for control 10 such an interesting spot, I had to use it.

After that, I found good terrain for the competitors spectator loop and then fit in a course which provided some route choices up to about 13 kilometers. I was able to use a rec course control which Jim P. had placed and we added the last control to force everyone into the finish from one direction.

At 11am Sunday morning, forty competitors assembled on a trail next to the Donavon School. Most were veterans of the traverse, but there were 2 who had never orienteered before! How would they make out? Some quick instructions had been given, and some advice that following might be a good idea, but I just hoped everyone would be to the finish by 3:44.

After the start, I joined Tony Valentine in setting up the Shaklee drink and food station on a nice open hilltop south of Houghton’s Pond. Carl Underwood came through with almost a 1 minute lead over AJ Riley, running well for his junior status. Carl lengthened his lead through the rest of the course and earned his giant cookie man for his efforts.

On the women’s side, Alex Jospe and Rachael Rothman, came through the food station together with a group of men, which included veteran Ernst Linder. In the latter half of the course Alex put in some hard uphill efforts to pull out a 90 second lead over Rachael, but Ernst ran even harder, and navigated better, to pull away from Alex by 8 minutes and grab sixth overall, and just behind Master’s winner Wyatt Riley.

Overall the comments were positive, ranging from “beautiful woods” to “Meh, but there were lots of trails”. I am glad to have now mapped almost all of the Blue Hills Reservation and added some interesting terrain.

Thank you to all involved in making this happen. Special thanks to Andy Hall putting out the first water stop, Jim Paschetto for taking on the rec courses, Tony Valentine for standing around in the cold at the food station, and Judy Karpinski for being the food hostess with the hot soup.

See you all next year.
- Jeff Saeger

Thanks to all the "Recreational" (i.e. non-Traverse) participants who faced the cold temps and wet trails today. It turned out to be a nice day to be in the woods, but did anyone return with dry feet?

We had a respectable 63 starts, including the thirty-plus cadets from Madison Park Technical Vocational H.S. (Marine Corps) and John D. O'Bryant H.S. (JROTC). The course offerings were limited, in yet another attempt to design an event with minimal demands on the meet director. There were just three courses (the "Short Intermediate" was a truncated version of the "Intermediate," run in the opposite direction), and a lot of the controls were shared among courses. In retrospect, it would have been less confusing to name the courses what they were: Yellow, Short Orange, Orange, & Green.

The day held its share of surprises. Two dibbers were lost, on different courses. A couple of orienteering stalwarts stepped forward to search for them ...and both sticks were found! Thanks to Andy Hall and David Landrigan for relieving two entrants of the dreaded "lost stick" charge.

Then the Jessiman family showed up; one daughter an accomplished road racer and another NOLS-trained, but all first-time orienteers. They insisted on trying the Advanced course (danger Will Robinson!), which they proceeded to complete with a very decent time! We hope to see you back orienteering in the spring.

Lots of folks deserve thanks for selflessly working today. Special Gold Star goes to Kelly Guarino, who handled data input and downloads for the entire event, both Rec and Traverse! Pia Webb gave early, valuable design guidance, and helped with Registration and instruction. Peter Amram helped at every stage: course design, location vetting, hanging controls, Registration, and control pick-up. Barb Bryant came early just to hang controls, but couldn't stay to run a course :-(  Sylvie Guichard brought snacks/water, and worked all day with Registration and instruction. Mark O'Connell helped with set-up before his Traverse run. Andy McIlvaine and Suzanne Robinson dealt with the early crush at Registration. Bill Binette dealt with returned finger-sticks, and did "public relations" work with curious passersby, then picked up some distant controls. Joanne Sankus caught most of the day's snapshots (see menu News>Galleries) and picked up many controls. Jeff Leiserson continues to customize and send the Weekly Update emails, where we beg for volunteers. Thanks also to those people who volunteered to help, but were not needed—it's a rare thing for a meet to have an excess of volunteers! If I've not mentioned your help, please let me know.
- Jim Paschetto

This event is available in RouteGadget (in the Results menu) — share your route, or just use the Splitsbrowser (click

in the Routegadget2 menubar).

Remember to check-out before you go home!

Always report to the results computer before you leave a NEOC event — even if you don't complete your course.
We want to be sure that everyone is safely out of the woods!
NEOC is an all-volunteer organization.